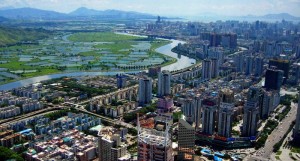 It ran under the theme, “Ushering in a Bright Future for Smart Cities.”

“More importantly, we develop a digital brain for cities in hand with application partners, building a common ecosystem with mutual advantages,” he said in his presentation titled, “Building a Maslow Model for Smart Cities.”

In addition, Huawei has built 12 OpenLabs around the globe to conduct customer-oriented joint innovation with partners.

As a co-organizer, Huawei is a global leading Smart City and Safe City solution provider.

Huawei Smart City and Safe City solutions have served more than 700 cities in over 100 countries.

“Based on Huawei’s digital platform, cities will be like organic life. New applications will emerge and grow through iteration, and eventually achieve overall prosperity,” Lida continued.

The event coincided with the 70th anniversary of the People’s Republic of China, and 40 years since the establishment of Shenzhen city.

The forum also aligned with the United Nations 2030 Sustainable Development Goals, which include sustainable cities and communities.