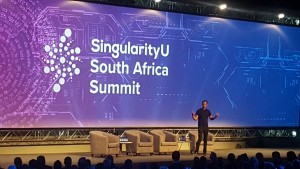 Africa and some of the world’s foremost innovators in technology and finance will converge in Cape Town, South Africa next week at the SingularityU Conference

by MTHULISI SIBANDA
JOHANNESBURG – SOME of the world’s foremost innovators in technology and finance will converge in South Africa next week as part of efforts to future-proof the continent into the fourth industrial revolution.

They will meet under the aegis of the inaugural Exponential Finance Summit, organised by SingularityU South Africa, in collaboration with partners Development Bank of Southern Africa, Deloitte and MTN.

SingularityU South Africa has announced more speakers to the programme for the inaugural summit, which will take place at the Cape Town International Convention Centre on May 29 and 30.

“As part of our journey in future-proofing Africa, we are thrilled to have added more incredible speakers to the lineup for our Exponential Finance Summit. We feel a great sense of pride to be bringing these world class experts and thinking to our South African shores,” said Shayne Mann, co-Chief Executive Officer of SingularityU South Africa.

“Impact is the currency of the future and these new speakers promise to add exactly that,” Mann said.

Glynn is the co-founder and General Counsel of MobileCoin, a company that provides private, mobile and digital cash payment systems. His talk will address privacy in the world of exponential data.

Kallner, currently the CEO for Discovery Life, and overseeing the group’s Marketing and Distribution, will address the convergence between banking and insurance.

Wierzycka is known for her strong anti-corruption corporate activism in South Africa. She is in high demand domestically and internationally as a speaker on the topic of ethical corporate leadership.

Malinga, who recently returned from Silicon Valley, is part of the Singularity University South Africa faculty with a focus on Internet of Things (IoT) and Big Data.

Managing Director of SqwidNet, Malinga is responsible for building an IoT connectivity business in South Africa in partnership with International IoT giant SIGFOX.

In addition to his CEO role, he oversees the solutions division for SqwidNet, a fully-owned subsidiary of Dark Fibre Africa.

As a member of the South African Singularity University faculty, Rosman specializes in machine learning, artificial intelligence, robotics and automation.

He is a principal researcher in the Mobile Intelligent Autonomous Systems group at the Council for Scientific and Industrial Research (CSIR) in South Africa.

Rob Nail, CEO and associate founder of Singularity University, said, “We expect that these two days will incite and inspire action that will lead to breakthroughs in Africa’s economy.

Tags : Africa and some of the world’s foremost innovators in technology and finance will converge in Cape Town South Africa next week at the SingularityU Conference