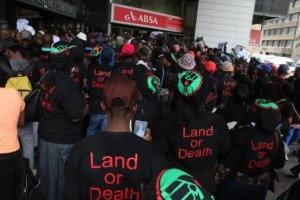 OPINION by SAVIOUS-PARKER KWINIKA
Editor-In-Chief
JOHANNESBURG – SOUTH Africa’s prolonged land reform programme, if not resolved now, will soon be likened to deadly United States atomic bombs dropped over the Japanese cities of Hiroshima and Nagasaki during World War II in 1945.

Thus, further delays by white minority farmers, who inherited stolen land and yet continuously buy time by refusing to share this natural resource with indigenous majority blacks will soon come to haunt them in a painful manner.

It is inevitable whether these farmers continue employing delaying tactics by threatening food shortages and clinging onto the ill advised willing-buyer-willing seller concept.

The destiny for an estimated 59 million majority black South Africans can only be delayed, but surely, can never be denied.

This move to refuse sharing thousands of stolen land would soon become veld fire, which even superpowers like the United States of America (USA) and its European Union (EU) allies will not be able to contain.

Continuously paying a deaf ear on this fast looming calamity, while romanticizing the racist stance of willing-buyer and willing-seller concept, will definitely not save the unjustifiable manoeuvres of clinging to stolen property.

The earlier the white farmers unfairly clinging to thousands of hectares of land stolen during colonial era of land dispossession to start sharing the land with rightful owners, the black people, the better.

I have traveled the length and breadth of South Africa to covering social news developments and elections.

Unemployed youths, who have acquired farming skills yet cannot access land, will soon mobilise themselves to claim what is rightfully theirs.

A second and unstoppable revolution by young and angry blacks is looming.

When such man-made avoidable crises continue to unfold unattended, the masses will just organise themselves to redress the past injustices of land dispossession.

Even fellow blacks owning multiple farms will not be spared.

I have witnessed these past injustices among blacks themselves in countries like Africa’s most populous nation – Nigeria, where thousands of people have died in persistent land violence between farmers and pastoralists.

Now, in this case, the whites are foreigners in Africa, who came to this continent violently, savagely and forcefully remove blacks from their land.

Despite these past injustices, the minority white farmers resist to surrender stolen land, and worse, lecture their victims about the rule of law, democracy and human rights.

Where were human rights, rule of law and democracy when millions of blacks were unfairly massacred in the genocide perpetrated by Europeans?

In this case, peace-loving blacks are not at all advocating pushing away their white counterparts. They are asking for equitable distribution of their natural resource. Those who forcibly took the land are refusing.

The raider, looter, plunderer, pillager and marauder is crying the loudest about human rights, rule of law, property rights and democracy.

My humble advice and well informed counsel to white farmers, is, do not wait for the sad chapter to unfold. Kindly allow the voice of reason to prevail so that there is peace eventually.

We have seen the happenings in Israeli-Palestine, where there is long running land conflict. This is to the white farmers’ advantage to take precautions before unstoppable disaster strikes.

It’s always better to share than to completely lose everything. Not far from your northern neighbours Zimbabwe, when the issue of land sharing was raised, they cannily and cheekily lectured them of human rights, democracy, rule of law and property rights. Guess what? They lost everything.

Forewarned is being forearmed.

After all, no black person owns land in Europe, Middle East, Asia or America. As media, our duty to inform, educate and entertain the public, including government office bearers.

Tags : The message on new party Black First Land First (BLF) 'Land or Blood' is clear message to those with ears to hear