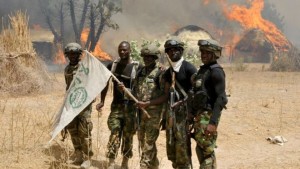 from EMEKA OKONKWO in Abuja, Nigeria
ABUJA – NIGERIAN police have arrested three suspected Boko Haram commanders at some hotels north of the country.

The suspects were arrested in the city of Kano while they were allegedly regrouping in an attempt to travel to the northeastern state of Borno to perpetrate attacks.

Ahmad Iliyasu, the regional police commissioner, said the trio was among more than 80 culprits recently arrested in connection with violent crimes afflicting the West African country.

They have been arrested during the so-called Operation Puff Adder.

Suspects were nabbed for other crimes such as armed robbery, kidnapping, vehicle theft and banditry.

An assortment of weapons, illegal drugs, electronic equipment and vehicles were confiscated.

Iliyasu said the suspects would soon be arraigned in court.

“The operation of Puff-Adder will be sustained throughout the state until all criminal-minded persons repent or leave the area,” he said.

Nigeria, Africa’s most populous country of more than 190 million people is experiencing a surge in violent crime.

Some 134 000 people have this year been forced from their homes across the states of Borno, Adamawa and Yobe because of the conflict perpetrated by the Boko Haram.