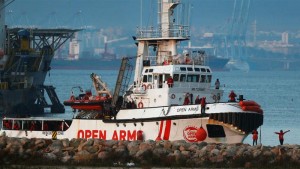 Proactiva Open Arms boat is seen here rescuing migrants at the Mediterranean Sea enroute to Europe. The migrants docked at the Center for Temporary Assistance to Foreigners (CATE) in the port of Algeciras, Spain, File photo: Jon Nazca/Reuters

from AHMED ZAYED in Tripoli, Libya
TRIPOLI – EUROPE has been urged to allow the immediate disembarkation of more than 500 people recently rescued on the Central Mediterranean but remaining stranded at the sea.

Many are reportedly survivors of abuse in war-torn Libya and are from refugee-producing countries.

Some 151 people remain on board the Open Arms boat while 356 people more have been rescued in recent days.

“This is a race against time,” said Vincent Cochetel, United Nations High Commissioner for Refugees (UNHCR) special envoy for the Central Mediterranean, said.

He said storms were brewing and conditions were going to worsen.

“To leave people who have fled war and violence in Libya on the high seas in this weather would be to inflict suffering upon suffering. They must be immediately allowed to dock, and allowed to receive much-needed humanitarian aid,” Cochetel said.

Migrants from the African continent, desperate for refuge and improved economic opportunities, continue braving the dangerous journey via the Mediterranean and hostile European governments.

Most use the conflict-prone Libya as the gateway to Europe.