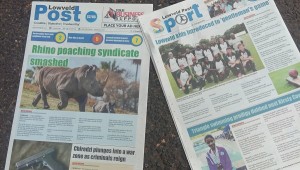 from SHELUZANI MAKHESE in Chiredzi, Zimbabwe
CHIREDZI: – FIRSTLY, I’m deeply excited to introduce this historic media voice to communities of Lowveld, which has not known own media voice since the dawn of independence in 1980.

It is with heartfelt humility to present to you the inaugural Lowveld Post edition of our weekly publication to serve the people of the region, mainly Chiredzi, Chikombedzi, Chisumbanje, Hippo Valley Estates, Mkwasine Estates, Save Conservancy, Triangle Limited, Sengwe and Tshovani communities, which include Mwenezi, among other neighbouring districts.

The Lowveld region grossly lagged behind in many ways in terms of development despite boasting diverse economic activities mainly agriculture, tourism and wildlife, which are a mainstay to the country’s economy.

The region also teems with the rich cultural heritage of the Shangaan/ VaTsonga people.

It is my view that a community without its own media voice is dead.

Having been born and bred from the town of Chiredzi, and hailing from Chikombedzi communal lands under Chief Sengwe, but now living in the Diaspora, I have found it necessary to give my own people their voice.

I urge all residents and dwellers of Lowveld to receive this light called Lowveld Post and fulfill your beloved region’s economic potential.

There is a daily online news updates. With the advent of technology, Lowveld Post, as an integrated media will be a prime means of access to news.

As your trusted media voice, Lowveld Post, assures businesses, individuals and corporate a platform to communicate their messages to a wider group of people locally, regionally and internationally. Our media outlet will connect this region with the entire nation, Southern African Development Community (SADC) region, Africa and the rest of the world.

I am convinced investors from all over would flock to invest in Chiredzi, and the entire communities under chiefs Sengwe and Tshovani when they see such exciting people stories in Lowveld Post.

This historic development will ensure the Lowveld’s exposure to the entire globe. It is my strong belief the coming in of Lowveld Post publication will increase economic synergies, business partnerships, promote development, unity, peace, love and harmony. May I also assure enemies of progress will be exposed too.

The Lowveld Post will be a conduit to the challenges faced and successes attained in the region. It will be the eye, ears and voice for the above-mentioned economic sectors and mostly minority tribes in the region.

The publication seeks to unlock economic opportunities, which remain untapped due to lack of meaningful development.

It is our hope Lowveld Post will be fully embraced by all as it seeks to become a catalyst for economic development by promoting innovation, agriculture, tourism, wildlife, arts and culture of the minority whose voices yearn for recognition.

Economic development and promotion of the rich cultural heritage and the arts will in turn create employment.

Our vision is built on Credibility, Objectivity and Trust. While assuring all fair and objective media coverage, Lowveld Post would expose such vices as corruption that undermines development.

All other ills that hinder economic development and unity of the nation will not be spared.

Generally, Lowveld Post will play the primary role of educating, entertaining and informing.

Lastly, I would like to thank the Government, through the Zimbabwe Media Commission (ZMC), for issuing us with a license.

We will complement government’s role to ensure meaningful development to its citizens regardless of tribe, race, colour or geographic location.

May I conclude by urging you all businesses and stakeholders make Lowveld Post your market place where various businesses are exposed through advertising, sales and marketing.

Lowveld Post, www.lowveldpost.co.zw, will increase selling points throughout Lowveld and Chiredzi during course of the month.