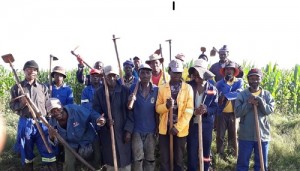 from ANNA NTABANE in Nelspruit, Mpumalanga
NELSPRUIT – WHAT started as a mere community gardening project has grown considerably into one of the province’s major sources of grain, livestock and employment as well as a philanthropic enterprise.

It expanded to Piet Retief and eventually to Leeuwpan.

From focusing solely on horticulture, LTSL Trading has grown into a major producer of maize and soybeans.

The farm also provides bales for cattle, chickens and pigs to nearby farms.

“We also employ seasonal workers. With them numbers vary from year to year depending on the amount of work,” Lesesa said in an exclusive interview with CAJ News Africa.

Some 25 seasonal workers were employed last year during planting and harvesting period. Overall, 46 people were employed.

LTSL is also involved in charity initiatives such as funding a Down’s syndrome Association in Mpumalanga province.

It also hosts the annual sport day for inmates at the Witbank Correctional Services in Emalahleni.

“We have also helped build 50 huts for the Mnguni family, who are our neighbors and we are also offer our neighboring subsistence farmers bales and grazing for their cattle,” Lesesa said.

He mentioned it had not been plain sailing and it has taken determination to grow the project.

“I had problem with finances, fencing and equipment,” Lesesa recalled.

The farm house had been vandalised prior to them taking occupancy.

There was no water or electricity at the farm making production difficult.

“There are trenches that were dug by the previous lessee at the expiry of his lease contract. He left it open, thus endangering the safety of our livestock. And in digging these trenches, some of the fences were destroyed,” Lesesa concluded.