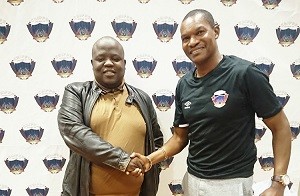 by TINTSWALO BALOYI
JOHANNESBURG – AFTER getting his Absa Premiership coaching career off to a victory, Chippa United mentor, Norman Mapeza, revealed he had to revive the hunger among players to venture upfront than merely focus on keeping possession.

The strategy worked as the Chilli Boys secured their first victory of the season with a 1-0 win over Bloemfontein Celtic in Telkom Knockout tie at Sisa Dukashe Stadium in Port Elizabeth on Tuesday evening.

“When I joined the team, the boys were merely knocking the ball without venturing upfront. There was no hunger to score or to take shots,” Mapeza said.

“Immediately after taking over, my first task was to demand the players to move upfront more often, hence the positive result,” the former Zimbabwe captain said.

Admittedly, Mapeza said there was still some way to ensure the players bought into his philosophy.

He was however pleased with the commitment shown against Bloemfontein Celtic and believes there were glimpses on how he wants the team to play.

“There is a lot of work to do but we will eventually get there,” Mapeza said.

Chippa’s reward for Tuesday’s victory was a draw against league champions Mamelodi Sundowns in the Telkom Knockout quarterfinals but the immediate focus is an away fixture to Highlands Park on Saturday evening.

Mapeza, who briefly starred for Ajax Caper Town in his heyday, joined the embattled Eastern Cape side following the sacking of three coaches eight matches into the new season.

Bottom-of-the-table Chippa United lost four and drawn the other four, compelling club owner, Siviwe “Chippa” Mpengesi to pull the trigger and seek for a solution across north of the Limpopo.

There is hope he can translate his success at ambitious Zimbabwe side, FC Platinum to Chippa United and revive its fortunes.

Mapeza has previously guided FC Platinum to the league title.