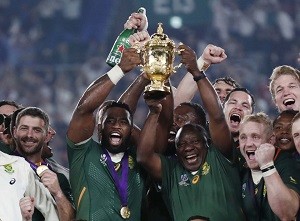 by SAVIOUS KWINIKA
JOHANNESBURG – SPONSORS of the Springboks have congratulated the team after winning the Rugby World Cup in Japan.

MTN South Africa said two and a half years ago, the Boks were facing bleak times, but the company stated it was aware the team had the potential to fight back.

“Under the exceptional leadership of Coach Rassie Erasmus and the rest of the management team – they proved they are truly the best in the world,” said Godfrey Motsa, MTN SA Chief Executive Officer.

Motsa said the partnership with the Springboks had been momentous.

Every MTN employee was given a Bok jersey while MTN customers across the country embraced Bok Friday and every aspect of this sponsorship.

Bok Friday encouraged South Africans to wear the Springbok jersey on that day each week.

“This team, by representing us all, has united us all and we thank South African Rugby Union for this wonderful partnership. We could not be prouder,” Motsa said.

Samsung South Africa, the official electronics partner to the
Springboks, also hailed the team for uniting the country.

“The power of sport to unite a nation is once again firmly in the spotlight and we are proud to be a part of this great moment in our country’s sporting history,” Cambridge Mokanyane, Samsung SA Chief Marketing Officer, said.