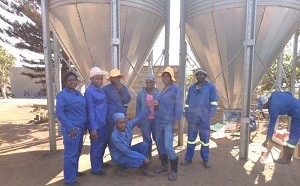 from ANNA NTABANE in Nkomazi, Mpumalanga
STEENBOK – THE strong work ethic her father instilled in her is paying off 26 years later as Sinethemba Sambo emerges as one of the most successful up-and-coming farmers in South Africa.

A mother of two chidren, her success story is made more amazing by the fact that she studied nursing.

She manages Siyavuya farm in Steenbok in the Nkomazi local municipality in Mpumalanga Province.

The farm, which supplies vegetables, fruits, poultry, beef and fish to local markets and neighbouring Mozambique, started in 1989 with two poultry houses but has grown to operate 13 poultry houses, 13 hectors and three dams for aquaculture.

“One major thing my dad taught me was to be a hard worker because nothing comes easy in life. So I had to work very hard,” she said in an interview with Mpumalanga Guardian.

She spent most of her childhood days working in the farm.

“I didn’t play with other kids. I always had to run back home (after school) to go help at the farm,” said recalled.

She finished her matric in 2012 and furthered her education at a nursing college in Johannesburg. She is currently studying business management.

Major supermarkets as Boxer and Pick n’ Pay are among the farm’s major clients.

“Even people from Mozambique they order from us,” Sambo” added.

“Working at Siyavuya is overwhelming. We are treated like family. The love is out of this world,” Chauke said.

In October, some local municipalities will be sending people interested
in farming to undergo learnerships at Siyavuya.

“They are going to send 50 youth who will be attending programmes twice a week for 6 months,” Sambo said.

The farm plans to build an abattoir and modern poultry houses, thus creating more employment opportunities for the youth.

Sambo has won three awards locally for her exploits in agriculture, and has been recognised nationally in aquaculture.