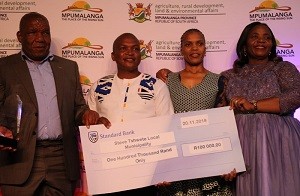 Steven Tshwete municipal executives showcase their cheque after they have been adjudged the greenest in the Mpumalanga Province. Photo by Anna Ntabane, CAJ News Africa.

from ANNA NTABANE in Secunda, Mpumalanga
SECUNDA – THE Steve Tshwete municipality in Middelburg has been adjudged the greenest in the Mpumalanga Province.

It has won the grand prize of R100 000 in the Greenest Municipal Competitions (GMC) awards recently-held in Secunda.

A brainchild of the Department of Agriculture, Rural Development, Land
and Environmental Affairs, the awards are aimed at encouraging municipalities to be leading agents of service delivery and adopt Green practices as well as promote the sustainable developmental goals and safeguard the environment.

There is also the leadership and institutional arrangements award.

“The main purpose of the gathering is to recognise the efforts of our municipalities and to award prizes to the best performing municipality in our beautiful province,” said Vusi Shongwe,Member of the Executive
Council: Agriculture, Rural Development, Land and Environmental Affairs.

Overall winner, Steve Tshwete municipality, has thus qualified for the national GMC Awards to be held at a date to be announced.

“The plan for us as a municipality is to to do more environmental projects,” the winning municipality’s Johan Matshiane, said.

Tags : CAJ News Africa City of Mbombela executives pose for a photo to showcase their cherished awards won at the event. Photo by Anna Ntabane