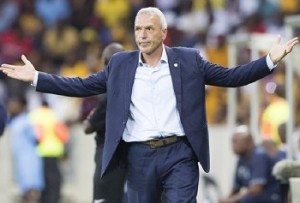 Their success-starved cross city rivals that had misgivings at Josef Zinnbauer taking the reins at Orlando Pirates, are in the same predicament.

This as the two German tacticians’ appointments to lead South African football’s household names emerge a master-stroke by the two Soweto sides who in recent years have only been relevant clinging on past glory and riding on the coattails of their prominent badges.

While Middendorp’s appointment late last season gave the boo-boys some justification to jeer as Chiefs finished ninth, embarrassing by their standards, he has transformed the Amakhosi into an outfit on the verge of a first league title in five years. 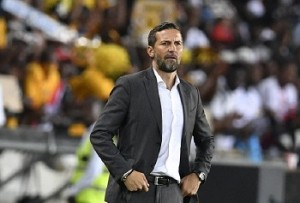 The Freren-born Middendorp (61) is in his second stint in charge of a Chiefs outfit that is perched comfortably atop the 16-team BSA premiership standings as the title race reaches its home stretch.

The log leaders, enjoying a ten-point cushion at the summit, restated their title credentials with the slenderest of margins away to Golden Arrows this past weekend.

Midfielder Lebo Manyama struck deep into injury time to secure maximum points in a match on which his side struggled to exert influence but might prove to be decisive at the end of the season should the campaign go down to the wire.

The smash-and-grab win at the Moses Mabhida Stadium secured a marvelous 14 wins from 19 matches. Three matches have ended in draws and two in losses.

In Middendorp’s countryman, Zinnbauer (49), rivals Pirates seem to have installed the best man to lead them back to glory after a trophy doubt dating back six years.

While his countryman is from the northwest, the genial Zinnbauer is from the east. He hails from Schwandorf.

Zinnbauer’s impact since his appointment to head Pirates in December has been phenomenal.

The Sea Robbers are unbeaten, on seven outings, since he took over from the ambitious but wanting Rhulani Mokwena.

After winning five of those past six matches, the Buccaneers sit fourth on 33 points and in with a mathematical chance of snatching the title from right under the nose of their Soweto rivals.

Zinnbauer’s rejuvenated charges secured a 1-0 win over troubled Amazulu at the Orlando Stadium on Saturday.

Pirates are fourth on the standings and can end the week second, with a fixture on the cards away to Chippa United at the Nelson Mandela Bay on Saturday afternoon to fulfill.

On the same day, Supersport United, ever determined to clinch the title, are away to Arrows at the Sugar Ray Xulu in Durban.

On Sunday, Black Leopards, in familiar position at the wrong end of the table, welcome Stellenbosch at Thohoyandou, Limpopo.

Bottom-placed Amazulu will host beleaguered Polokwane City in a battle of the two-worst placed sides in the league.

League action would have resumed on Friday with Maritzburg United and Cape Town City battling out at the former’s Harry Gwala Stadium.