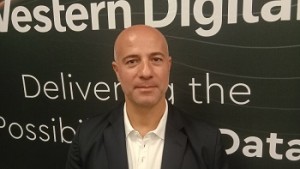 by SAVIOUS KWINIKA
JOHANNESBURG – A TECHNOLOGY executive has called for the industry to explore new data storage technologies and architecture to cater for Africa’s mostly youthful population.

Youths make up three-quarters of Africa’s population of 1,3 billion and data is increasingly becoming a need.

Speaking in Johannesburg in an interview with CAJ News Africa on Wednesday on the sidelines of a roundtable media, he said content creation and consumption always fueled memory, hence the need for the introduction of the data storage solutions.

“The more people are connected the more they use data,” Azzi said.

“Right now our concern is not about competition but to bring data solutions that would address South Africa and entire African continent needs,” he added.

He said following the announcement of new product solutions in South Africa, similar announcements will be made in North (Egypt), West (Nigeria) and East (Kenya) Africa during the course of the year.

“We have chosen South Africa first because it is the most advanced economy in the African continent,” Azzi said.

He said there was huge demand for mobile data storage solutions in South Africa.

He said the world needed new data storage technologies and architectures as the scale of data continued to increase as was the diversity of application workloads.

“Some applications require a means to easily manipulate vast amounts of data (Big Data). In the first scenario, performance is key. In the second, capacity is critical,” he said.

The United Arab Emirates (UAE)-headquartered technology giant is ranked fourth in the sector that is also dominated by Amazon, Appale and Google.

“Most of the world’s data has been stored in our devices,” Azzi said.