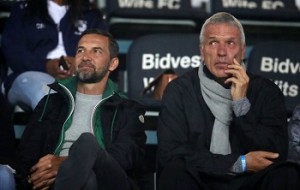 JOHANNESBURG – THE incessant delay in the kickoff of matches, as a safety measure to quell disaster posed by fans coming late into the stadiums, is a persistent sideshow blighting the image of the South African Premiership, a league that takes pride in its ranking as the most lucrative in the African continent.

Images of fans pushing and shoving in desperate and dangerous attempts to access venues are a common sight at matches, particularly each time a so-called bigger team is in town for away clashes with the supposed minnows.

The fixture between arguably the biggest teams in the local Premiership is nonetheless not exempt.

The delays have emerged a public relations disaster to sponsors, the league, which enjoys wide coverage outside South Africa’s borders. The holdups also impact on the schedules of the broadcasters and is an inconvenience to the fans who arrive in time to watch the Beautiful Game.

Delays are also a debacle for personnel providing security at venues, as they have to contend with unruly fans.

The fixture most prone to holdups is the Soweto derby, hence a recurrence of this habit is feared ahead of Saturday when the FNB Stadium hosts the biggest spectacle in the South African sporting calendar.

Top-of-the-table Kaizer Chiefs and third-placed Orlando Pirates are to contest the eagerly-anticipated match with a lot at stake considering the fixture could have a bearing on the destiny of the Absa Premiership.

The match will mark the 50th anniversary of the derby.

Some fixtures between two sides, despite not bearing much significance as the Saturday fixture, have been delayed to accommodate fans with this culture of rocking up late, a high number of them under the influence.

With 20 000 people scheduled to attend a major music show to run concurrently at the adjacent Johannesburg Expo Centre, the Soweto Highway is set for a standstill hence the prevailing message to fans to make their way early to the stadium.

Players from Chiefs, the early pacesetters, and Pirates, who are making a later charge in the title race, reiterated the appeal for fans to shun the habit of arriving late.

“We need fans to come early. It is very important for us to kick-off on time,” Chiefs skipper, Willard Katsande said.

Players spoke out the delayed starts affected their rhythm.

“It is not ideal to emerge from the tunnel anticipating to kickoff only to be told the match has been delayed. Some players tend to switch off thereafter, hence at the last meeting (Ntsikelelo) Nyauza (Pirates defender) scored a first-minute own goal,” Katsande said satirically.

The match ended 3-2 in Chiefs’ favour.

Pirates captain, Happy Jele, also spoke of the frustration of a delayed start.

“It disturbs the rhythm of the players to warm up, return to the dressing room, appear onto the pitch only for the kickoff to be delayed, then warm up again,” Jele said.

The sale of fake tickets is among a chronic issue around this fixture.

Meanwhile, having two German coaches in the opposing dugouts spices up the derby.

Going to the fixture, Pirates are the form team, although their mentor Josef Zinnbauer, refutes they are challenging for the title.

“Our focus is on this match. It is nothing else beyond that. Our focus is always on three points,” Zinnbauer said.

Six points separate the sides, with Chiefs on 45 points with a game in hand.

Chiefs are enduring a wobble and are four points ahead of defending champions Mamelodi Sundowns.

Coach Ernst Middendorp is, however putting on a brave face.

“I always look at the performance of my team independent of the result. I have full trust and confidence in my team,” Middendorp said.