May 7, 2020 7:01 am by: administrator Category: BUSINESS, Energy, Featured, Mining & Engineering, MOTORING, Motoring News, National, NEWS Leave a comment A+ / A- 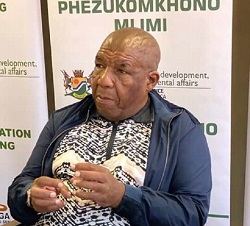 by ANNA NTABANE
EMALAHLENI – AUTHORITIES fear the lives of communities at Emalahleni are at risk after a traffic accident left them exposed to the smell of the highly toxic ammonia.

The chemical emerged from a trick that was involved in a collision on the N12 near this town previously known as Witbank.

The ammonia leaked onto the highway while some found its way into the drainage system which is connected to households.

Vusi Shongwe, the Mpumalanga Member of the Executive Council (MEC) for  Agriculture, Rural Development, Land and Environmental Affairs, is worried of the hazards that might emanate from the mishap.

“As a department, we are particularly worried about the negative effects posed by ammonia to the environment and human beings,” Shongwe lamented.

Shongwe, who dispatched a team of officials to the scene, confirmed
investigations into the incident were underway.

A priority is to establish if the company whose truck was involved in
the crash complied with the National Environmental Management Act (Act 107 0f 1998) on containing spillages.

“We understand that it was an accident but a meticulous investigation must still be conducted,” Shongwe said.

“We cannot gamble with human life especially as we are faced with the coronavirus and other health-threatening infections,” the MEC said.

Shongwe emphasised the importance of trucking companies that transport hazardous materials to first seek authorisation and keep to safety precautions.

The MEC commended the Emalahleni Local Municipality for arranging transport to remove affected residents exposed to the spillage.