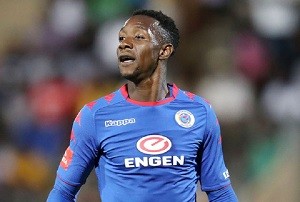 by SAVIOUS KWINIKA
JOHANNESBURG – EVANS Rusike will play no further part in SuperSport United’s Absa Premiership campaign as the Zimbabwean striker races against time to recover from a knee injury.

Kaitano Tembo, the Supersport head coach, said the restrictive environment during the escalating coronavirus (COVID-19) scourge was not conducive for the club’s medical team to properly assess his countryman.

Tembo confirms it is only feasible the 29-year-old marksman will return to action for Matsatsantsa in the next campaign.

“Evans is doing rehabilitation. We cannot fast track him. We will definitely use him next season,” the mentor said in an interview with CAJ News Africa.

This means the Chitungwiza-born player will not play in the six remaining games, which themselves shrouded in uncertainty as the COVID-19 pandemic cases continue rising in South Africa.

“There is a lot of progress. I’m happy with his progress but his return in the remaining games will be impossible,” he said of the former Maritzburg United marksman.

Rusike was last in action in February and was initially ruled of for six weeks.

Tembo welcomed the recent relaxation of the lockdown by the government, which he said would aid players’ recovery and fitness.

“We can up the tempo a little bit (in training) because we are allowed to run and do ball manipulation in order to stay fit, but the motivation is not the same under COVID-19 where players still practise on their own,” he said.

SuperSport is utilizing video technology to monitor individual player’s performance as part of the club’s training programme under the lockdown.

However, the main focus is to ensure the safety of players during the COVID-19.

For a team immense with youth, this is particularly a challenge for SuperSport which also has to offer them support so they do not excessively stress over the welfare of their families.

There is also the foreign duo of Gamphani Lungu and Moses Waiswa whose families are back in Zambia and Uganda respectively.

While Rusike is set to return next season, fellow strikers Thabo Mnyamane and Thabo Qalinge are on their way out of the club when their contracts lapse at the end of this besieged season.

Tembo could not be drawn to comment on the imminent exits.

“Look, I will not comment on that (signing of new players) because our CEO had already issued a statement,” he said.

“Players like Thabo Mnyamane, Thabo Qalinge and Dean Furman, who you know is returning to UK, are not going to be retained. When their contracts expire in June, they will be free agents,” Matthews has been quoted as saying.

United are third in the standings on 44 points, eight points behind leaders, Kaizer Chiefs, and four behind cross-city rivals and defending PSL champions, Mamelodi Sundowns.