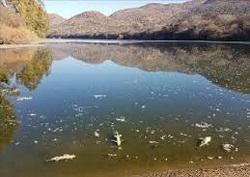 by GENEVIEVE MASHAMBE-KGAFE
VANDERBIJLPARK – IT never rains but it pours for the Emfuleni Local Municipality(ELM) where burst sewage pipes are a daily reality for residents.

Opposition parties have called on the Gauteng Provincial Government to intervene amid the ticking health time bomb that is also contributing to the contamination of the Vaal Dam.

The Freedom Front Plus (FFPlus) is leading the calls as sewage flows freely through neighborhoods and parks.

This has been happening for over a year.

There are fears the sewage issue could spill to the North West province as it currently flows in Ouhout Street, through the Piet Retief Park to DanieTheron Street which ends up in the Enslinspruit.

It is then transported to the Mooi River which eventually reaches Potchefstroom.

Amanda de Lange, the FF Plus, said they were communicating with the municipality’s water and sanitation department almost daily, in efforts to repair broken pipelines, but to no avail.

The party has urged the Gauteng Member of the Executive Council (MEC) for Cooperative Governance, Lebogang Maile, to take the municipality to task.

Maile, who recently placed the metro under administration, said, “There are financial recovery interventions put in place to deal with service delivery, as said before for now the services have been uneven because of ELM’s financial woes.”

“There has been progress made but more must be done, our aim is for the recovery intervention to also help with infrastructure problems to restore human dignity,” the MEC added.

He was hopeful stability will be retained in the next elections.

“We want to see Emfuleni financially viable and provide services to the citizens. We are aware that the services are uneven and not satisfactory,” Maile said.

Meanwhile, the troubled municipality risks being dragged to court by community watchdog, Save the Vaal Environment (SAVE) for failing to stop raw sewage spillage into the Vaal Dam.

Moureen Stewart, SAVE Vice Chairperson, said the watchdog had so far acquired nine court orders against the municipality over the years.

The most recent one, granted in February by the Gauteng High Court was to compel the municipality from allowing raw sewage into the rivers catchment area.