Home » Featured » Given is Highlands’ gift that keeps on giving

Given is Highlands’ gift that keeps on giving 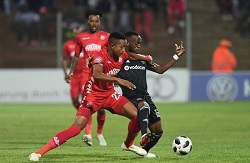 by MTHULISI SIBANDA
JOHANNESBURG – FOOTBALLERS are considered undereducated and overpaid sports stars that do not invest in their education.

They have no reputation for intelligence to complement their talent in the field of play.

Sphiwe Given Msimango, the Highlands Park midfielder-cum-defender, is determined to shatter that stereotype and is making the most of the coronavirus (COVID-19)-induced break to do so.

The lockdown imposed by government has enabled him to focus on education, which is his passion outside football.

He is pursuing a degree in Business Management with the University of South Africa (UNISA).

His juggling between football and academics is an inspirational anecdote, at a time local football fraternity is awash with tales of stars degenerating into destitution when the final whistle blows on their careers.

He is scheduled to complete his studies in 2022. Such is his passion that he has previously studied Accounting at another institution, University of Johannesburg (UJ) albeit abruptly.

Msimango had to switch to UNISA as it offered an online programme that offered flexibility.

“Football is a wonderful career and as wonderful as it is, it is a very short one,” the Brakpan-born enforcer said matter-of-factly.

“Within that short space of time, you can accumulate a lot of wealth and you can lose a lot of wealth,” he added in an interview with CAJ News Africa,  conducted as he was preparing for an examination this week.

As most players grumble over months of inactivity because of the shutdown of the local league following the COVID-19 outbreak and resultant lockdown, the player who recently turned 23 revealed how the restrictions were a blessing in disguise.

“COVID-19 hasn’t been great to anyone but it has given me an opportunity to focus more on my books,” Msimango said.

“I have found myself with a lot of time in my hands to study and take extra modules. Currently, I’m doing exams. I have enough time to study. So I can’t say it has been a double blow, but on the football aspect, it has been a blow.”

A 2015 matriculant from the Liverpool Secondary School, Msimango has challenged peers to attain education.

“As footballers or sportsmen, we can spare some time to learn a skill, learn a module or take a business or financial course to enable one to have some financial knowledge about business or things one can invest in.”

“The number one killer in our sport is that we lack knowledge of information on what do with the money that we receive. It is indeed good to receive money and take care of one’s family and oneself but we need to sustain ourselves even after the football has stopped,” he said.

“The only way I feel we can do that is through attaining knowledge. That way you are equipping yourself with the necessary skills that will benefit you for life after football. You can invest in business, property or shares. There are a lot of options to invest in. But they are not doing so because of lack of awareness.”

The dedication to education however does not mean he does not crave the action on the green of the Makhulong Stadium or the training ground in Balfour Park.

“One hasn’t touched the ball in a while, misses the field, playing. You are so used to a certain routine and how it has changed but things will go back to normal in terms of the sport,” he said.

He had featured in ten matches and scored a single goal, against Chippa United, before the COVID-19 halted the league.

His club captain, Tapuwa Kapini, is impressed with Msimango’s maturity, ability and dedication such that he draws comparisons between him and Liverpool and Netherlands colossus, Virgil van Dijk, as well as the current generation of great defenders.

“He is one of the best at our club and an example to the other boys. He is testament that when you are young but dedicated you can play in the PSL,” Kapini said.