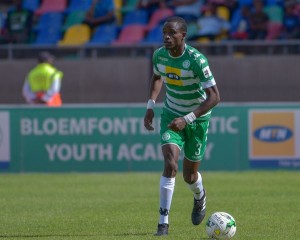 by MTHULISI SIBANDA
JOHANNESBURG – BLOEMFONTEIN Celtic Football Club, in need of some reprieve after some recurring off-field issues lately, have received a major boost after fullback Ronald Pfumbidzai made steady progress in his long injury layoff.

The extended coronavirus (COVID-19) lockdown has come as a blessing in disguise for the Zimbabwean star who was initially thought to be out of the rest of the season had it ended as per tradition in March.

Now, with indications the league will resume at a later stage when South Africa overcomes its COVID-19 peak, the 25-year-old seems likely to feature.

He has started light training back in Harare.

“I am coming alright,” Pfumbudzai said regarding his progress.

The soft-spoken defender said despite recuperating in his home country, he was fully aware of the uncertainty characterizing the club late but could not delve much into the issue.

Lehlohonolo Seema, the Celtic coach, confirmed the positive developments around his player.

He has been one of the most consistent performers since joining the Free State side in 2017 after a spell in the Danish Superliga side, Holbro.

Pfumbidzai was on loan from CAPS United, the former Zimbabwe champions.

Before his recovery, the player was enjoying another consistent spell, having played 12 matches, including 11 in the Absa Premiership and another in the Telkom Knockout.

He weighed in with a goal, albeit in a 3-1 loss to Orlando Pirates in August last year. Pfumbidzai has also provided an assist.

The versatile defender played his last four matches at centreback.

The Zimbabwean’s last match was in December when he featured in the 5-3 thriller Celtic lost to log leaders Kaizer Chiefs.

He missed the next ten fixtures with a groin strain. His return will come as a major boost for Celtic, which is placed ninth in the standings and chasing another improbable finish in the top eight after another tumultuous campaign.