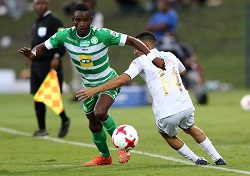 by MTHULISI SIBANDA
JOHANNESBURG – PROBLEM-prone Bloemfontein Celtic, still reeling from a series of recent off-field issues, has lurched into a mini-crisis amid a struggle to regain a couple of injured international players that travelled to their countries prior to the coronavirus (COVID-19) lockdown.

The latest setback follows the closure of borders and airspace by South Africa and neighbouring countries as part of restrictions against the raging virus.

As a result of the partial shutdown at points of entry, Celtic has been unable to have their Zimbabwean fullback, Ronald Pfumbidzayi, who is still holed back home in the capital Harare having travelled before South Africa announced the closure of borders in March.

Sources at the Free State-based premiership side disclosed Phunya Sele Sele also had a torrid time having Lesotho international striker, Sera Matebang, back after he also travelled to his homeland during the crisis posed by the global pandemic.

It could have been worse had the other international signing, Congolese attacking midfielder, Harris Tchilimbou, gone to his home country during the COVID-19 enforced break that has culminated in the league going on a lull for the past four months.

While the resumption of training ahead of a possible restart of the season has come as a relief to Absa Premiership teams, it has presented a poser for Celtic.

A source at the team said Pfumbidzai had been “stuck” in Zimbabwe, a development that was a dampener to the resumption of training under new head coach, John Maduka.

Sello Nduna, the Celtic Media Officer, confirmed in an interview the first-choice leftback was not back at the club.

“The player (Pfumbidzai) is still in Zimbabwe as there are currently no flights during the lockdown,” Nduna said.

He highlighted this was an issue beyond the club’s control.

“It is difficult therefore to say when the player will be back,” Nduna said.

Pfumbidzai was having another consistent season until a groin strain that restricted him to 12 matches, his last coming in the 3-5 defeat away to log leaders Kaizer Chiefs in December. He has since recovered.

Nduna meanwhile confirmed Matebang was back in the country but was, in line with protocol, on quarantine, and had not linked up with the rest of the players at training.

“He has been here (in South Africa) for days and has to quarantine,” the Celtic publicist said.

The Basotho international has also been laid off since December 1 after coming on a 71st-minute substitute for captain Ndumiso Mabena in a 4-2 win over Black Leopards.

He had a satisfactory season with four goals in 12 matches overall. He is one of eight Premiership on that goal tally, one of them teammate Menzi Masuku.

South Africa has imposed one of the longest lockdowns to curb the worst outbreak of COVID-19 in the continent.

The lockdown was effected at the end of March and months later, there have been 5 173 deaths from 373 628 cases, making South Africa the world’s fifth epicentre of the COVID-19 country.

Before the crisis, ninth-placed Celtic had debacles of their own, characterised by ownership uncertainties and recurrent reports of non-payment of salaries.