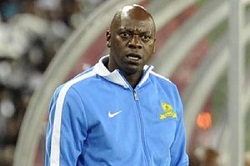 from MARCUS MUSHONGA in Harare, Zimbabwe
HARARE – FORMER Mamelodi Sundowns and Moroka Swallows head coach, Ian Gorowa, is now a man of the cloth while compatriot, Tauya Murewa, is pursuing a similar calling.

According to Zimbabwean media, Gorowa has decided to quit football and give his life to God.

“A calling is calling, you have to adhere to it,” Gorowa is quoted in the Sunday Mail.

“Football is a gift from God and I thank the Lord for that. Preaching the word is something I really enjoy. Life is a journey, but while it is a journey, you must make sure or make an effort to walk that journey on the right path; that is with Jesus,” he added.

“So I could say I took the path of Jesus. For the word says (John 14:6) ‘I am the way, the truth and the life. It is an awesome journey and, remember, the Lord uses whatever you have already. Moses was asked by the Lord, ‘what do you have in your hand?’ and he said, ‘I got a stick’, and the Lord said, ‘I will use that to show Pharaoh I have sent you.”

After quitting the game due to a knee injury, Gorowa coached Ajax Cape Town development before stints as head coach at Swallows, Sundowns and Thanda Royal Zulu.

Gorowa also coached the senior Zimbabwe national soccer team, famously guiding it to a fourth position at the African Championship of Nations (CHAN) hosted in South Africa in 2014.

At the time of becoming a pastor, Zimbabwean premiership side, Ngezi Platinum Stars, had expressed interest in offering him a coaching position.

Not much has been head of Murewa since he hung up his boots more than a decade ago.

A holder of Bachelor of Medicine and Bachelor of Surgery Degrees, Murewa played for Ajax and the now-defunct Umtata Bush Bucks.

“Tauya is not involved in football anymore. He is neither serving as a doctor,” a source was quoted as saying.

“He chose a different path and that might surprise many but that is what he decided to do and he is firmly dedicated to his cause.”

Murewa is committed to ZCC.

“To him, that’s all that matters now, serving this organisation, worshipping and doing work in various capacities for the ZCC,” a source said.