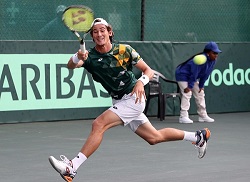 by AKANI CHAUKE
JOHANNESBURG – THE closure of South Africa’s borders because of the coronavirus (COVID-19) lockdown has brought international junior tournaments to a standstill.

The tournaments also include those organised by the International Tennis Federation (ITF) and hosted by Tennis South Africa (TSA), which were scheduled for next month.

“The junior nationals in September are being postponed and further announcement will be made once more certainty is available concerning travel and school calendars,” TSA confirmed.

TSA revealed the ITF circuits had announced a return to tennis as being August 31, but the host country needed to be able to prove that it was open to travel, which at this stage South Africa was not.

“Therefore, these events will be planned once we have more clarity on the re-opening of South African borders,” the local tennis mother body stated.

South Africa announced the closure of borders at the end of March as part of restrictions to flatten the curve of what has since degenerated into the worst outbreak of the COVID-19 in Africa and among the most severe in the world.

At least 8 366 people had died from more than 511 000 cases of the pandemic recorded as of the beginning of this week. Over 180 500 cases and 2 115 deaths have been confirmed in Gauteng, the province that is a regular host of such international sporting events.

The outbreak of COVID-19 in the Southern African country has led to the postponement of most sporting events.

Almost all sports codes are affected.

Some footballers that travelled to their respective countries before the onset of the lockdown have failed to return to South Africa.

Meanwhile, on a positive note, TSA has announced that local junior tennis tournaments will resume on the weekend of August 22/23.

“TSA is timing the return to events to be in line with the re-opening of schools,” it said.

However, the national mini-series will be played only within Gauteng due to inter provincial travel not being permitted during the lockdown.

TSA disclosed it would release a calendar on a six to eight week period to avoid unnecessary cancelling of events due to uncertainty over the revised school holidays and when inter provincial travel would be permitted.