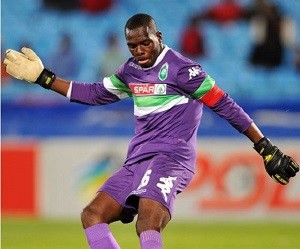 by MTHULISI SIBANDA
JOHANNESBURG – AHEAD of the resumption of the season, captain Tapuwa Kapini says recurring rumours of the club being on sale are not distracting Highlands Park players.

These reports first surfaced in June and re-emerged in recent days in a league where the buying and selling of statuses is somewhat trendy.

The rumour mill even disclosed first division club boss, Tim Sukazi, had put an offer to buy the Lions of the North.

The latest round of reports of Highlands Park receiving a financial offer come slightly over a week before they host defending league champions, Mamelodi Sundowns, home-away-from-home at Dobsonville Stadium.

Long-serving goalkeeper Kapini disclosed the players were focusing on the job at hand, which is to finish the campaign higher than the satisfactory seventh spot secured last season.

“We are committed 100 percent. We are doing our work as usual,” the Zimbabwean international said in an interview with CAJ News Africa.

He conceded such reports naturally could sidetrack any player’s focus but that was not the case.

“I wouldn’t want this thing to be in our minds. All we have to do is to work hard as usual. We need to be committed to our work regardless of the rumours. We must focus on the job,” Kapini added.

According to the veteran goalkeeper (36) Highlands Park’s objective is to finish higher than last season’s credible finish on 41 points.

They won nine in the last campaign but were undone by an excess of draws (14) which was the highest number of stalemates by any team in the top division.

Highlands Park currently occupy eighth spot with 31 points from 24 matches. They are one win away of matching last season’s overall wins tally with six games remaining.

“We have established ourselves and shown that we can compete with the big guns,” Kapini said.

“It will be good to finish better than we did last season. That is the objective. If we finish fifth or sixth, it will be a great achievement for the club. Remember, we also went into the final of the MTN 8,” Kapini said.

The 1-0 loss to SuperSport United in their maiden final in October last year, as well as the 2-0 loss in the league to the same opponents in their last game pre-lockdown in March, are a distant memory in the longest campaign in Premier Soccer League (PSL) in history.

Kapini watched from the sidelines following a shoulder injury. He returned to action in a 1-0 extra time loss to Sundowns in the Nedbank Cup quarterfinals, also in March.

The last time The Lions of the North sold their status was ahead of the 1983 season when Jomo Sono bought their berth in the elite league.

They clawed their way back for the 2016/17 season, only to be relegated and promoted again the next season.

Management has insisted the club is not for sale.