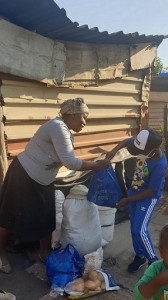 by MTHULISI SIBANDA
JOHANNESBURG – SIMTHANDILE “Sim Tiger” Tshabalala is known across the globe as the little South African with a courageous heart on the golf course.

He has shown he has a big heart off it too as the country battles the coronavirus (COVID-19) scourge that has worsened poverty levels among the most impoverished communities.

The eight-year-old sensation, whose maturity ever belies his age, has donated food parcels to communities worst affected by the pandemic and the subsequent lockdown the government has imposed and continuously reviewed to curb the spread.

Some communities in informal settlements in Gauteng, the province that is now the epicentre of the health crisis, have benefitted from the youngster’s philanthropy.

One of the region’s most underprivileged areas, benefitted from food parcels.

“Simthandile decided to try and assist with food parcels for those in need. We went to Diepsloot to distribute the parcels,” his manager and father, Bonginkosi Tshabalala, told Sun Sport.

The manager said the golf prodigy had always been a selfless and generous individual.

“He always help others out of his own will. He has a very kind personality and is a very caring child,” Bonginkosi said.

Despite his tender age, he is already giving back to the sport that has made him a global sensation.

“He donated his old golf clubs to another young golfer,” the older Tshabalala disclosed.

Sim Tiger has also taken to social media to highlight the plight suffered by communities because of the pandemic.

One of the most moving experiences is finding a community where people did not have any source of income and lacked basics such as electricity and clean drinking water.

He also met a woman on her back on her way to fetch firewood.

She lost her job due to COVID-19 and had no one to support her and the child.

He also drew inspiration from a man selling snacks on the street and makes about R20 a day to support his family.

“Let’s unit and help our people,” the minor said after handing out parcels,” Simthandile, already hailed as a nation builder, said.

He has not been spared the global impact of COVID-19 since March.

The embargo came at a time Sim Tiger’s flourishing career was on a high.

Nicknamed after Tiger Woods, he came second in his age group in the Australian Open in January.

Also this year, he participated in the 2020 Presidential Golf Challenge, partnering head of state, Cyril Ramaphosa.

Minister Nathi Mthethwa also conferred on him the Excellence Award at the South African Sports Awards.

Sim Tiger has clinched more than 20 trophies since he started playing golf at the age of four.