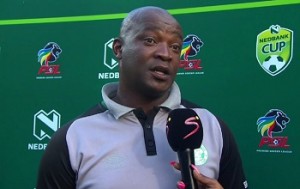 The coach insists the priority is now saving the team’s topflight status and then working on the goal scoring problem during the off-season.

“It does not bother me now,” the Chilli Boys mentor said of the team’s allergy to goals.

In an interview with CAJ News Africa, Seema disclosed Chippa’s focus was now avoiding any losses or at least getting a single victory to finish this challenging season in a respectable position.

“As long as we do not lose games…we will work on it (goal scoring) during our pre-season,” he said. Seema was not part of Chippa United’s pre-season, having joined last month from Bloemfontein Celtic.

The mentor, although he could not disclose, said the technical team had identified the problem behind the lack of goals.

“The good thing is we are getting there, so it is not a problem to me,” Seema emphasised.

“Winning with a one-nil score for now, I am more than happy than a 5-4 scoreline,” he added in reference to his team’s last performance.

His side won through a solitary, 11th minute, goal by Nigerian forward, Augustine Chidi Kwem, over relegation-haunted Baroka.

The last time Chippa United managed more than a single goal in the league is a distant memory. It is 11 games ago, in January, in a 2-1 win against Black Leopards. The Eastern Cape side has managed five goals in the matches following that win.

The total of 16 goals scored in 27 league encounters in 2019/20 is the joint-worst record in the league, shared with Baroka.

This is 11 less than last season’s total number of goals when Chippa United eventually ended 12th with 30 points.

Chippa United, again currently 12th on the log, are back in action on Friday against high-flying Stellenbosch United at the Absa Tuks Stadium.

“One more win…Our target is 33 points to be sure (of retaining status),” Seema said.

William Twala, the joint-leading scorer with Kwem on four goals, is out for the rest of the season with an ankle injury.