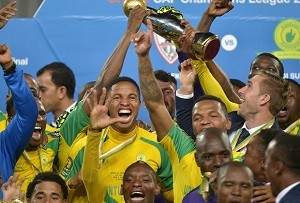 by MTHULISI SIBANDA
JOHANNESBURG – AS per tradition, newly-crowned champions, Mamelodi Sundowns, will keep the league trophy after winning the title for the third time in a row.

This clears the confusion around the destiny of the Absa Premiership trophy, with uncertainty emanating from the fact that the just-concluded campaign was the last to be sponsored by the financial institution, ABSA Bank.

Luxolo September, the spokesperson of the Premier Soccer League (PSL), confirmed this development in an interview with CAJ News Africa that the trophy will stay at
Sundowns’ Chloorkop base in the capital – Tshwane following the end of the longest campaign in the league’s history.

“That is true,” September said upon asked if The Brazilians will keep the trophy.

It was the tenth league title Downs have won since the advent of the PSL era in 1996, and the fifth delivered by head coach, Pitso Mosimane.

The team of the capital city upstaged Kaizer Chiefs on the last day of the season last Saturday.

Keeping the trophy is a major boost for Sundowns ahead of their Nedbank Cup final against Bloemfontein Celtic at Orlando Stadium on Saturday.

A victory will complete a memorable treble for Sundowns after having also clinched the Telkom Knockout.

With the destination of the league trophy confirmed, and the sponsorship of the elite league by Absa, a new trophy will be designed but the PSL is yet to provide details.

“We will have to wait for the launch for that (new season),” September responded.

The new season is presumed to kick off on October 9. A new sponsor is yet to be announced.

By winning a third successive league title in the Absa sponsorship era, Downs have emulated cross city rivals, SuperSport United, who won the trophy thrice from 2007/08.

The current silverware was crafted in place of the one SuperSport kept after improbable treble under Gavin Hunt.

By coincidence, Sundowns were the last side to win the league when it was still under the sponsorship of South African Breweries, through its Castle brand.

They are the most successful side in the PSL era and one of only four winners of the trophy under Absa’s sponsorship, alongside Kaizer Chiefs, Orlando Pirates,
SuperSport United and Bidvest Wits.

The Brazilians have finished runners-up three times since the advent of the Absa Premiership.