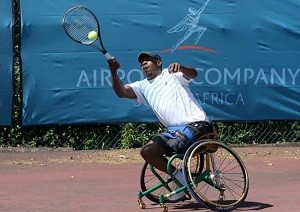 by MTHULISI SIBANDA
JOHANNESBURG – THE quest to unearth and nurture South Africa’s next global tennis stars on wheels is on.

Patrick Selepe, the Tennis South Africa (TSA) Wheelchair Tennis Development Officer, is driving the process that has managed to discover some talent across the country during an ongoing exercise that is gathering momentum as the country’s coronavirus (COVID-19) lockdown eases.

“The objective is to give people with disabilities an opportunity to play the sport locally and internationally,” he said in an interview with CAJ News Africa.

Selepe disclosed a number of gems had been unearthed in the provinces of Gauteng, Limpopo and Mpumalanga thus far, with more provinces set to be explored for the next stars.

“We are not specifically looking for a certain number,” he said.

“We accommodate anyone who is interested in playing the game as long as their disability meets the criteria.”

Wheelchair tennis was established in South Africa in 2004.

It operated as a separate entity from TSA until it was incepted into the country’s tennis mother body in July last year.

This has accelerated the growth of wheelchair tennis in the country, with that version of the ball-net-racket game considered by the International Tennis Federation (ITF) as a global success story.

“The response has been very good. The programme has grown a lot,” Selepe said.

However, wheelchair tennis has not been spared the global outbreak of the COVID-19 and the subsequent lockdown to curb the pandemic.’

“Our players and the whole programme is affected by the lockdown simply because all local and international events were postponed or cancelled,” Selepe lamented.

He added, “Players and coaches who were depending on the programme struggled a lot.”

“For this year we don’t have any ITF tournaments locally except for our High Performance players who will start with their tours soon.”

While the country has struggled in the mainstream version of the sport, South Africa has produced some of the finest wheelchair tennis players.

The Seshego sensation, Kgothatso Montjane, although without a Grand Slam title, is the first black South African woman to play at the Wimbledon.

Others to make a mark locally and globally include Leon Els, Evans Maripa, Donald Ramphadi, Alwande Sikhosana and Mariska Venter.

Selepe himself is globally-recognised as player and official.

In 2017, he (Selepe) was the inaugural winner of the ITF Spirit Award winner for his contribution to the sport.