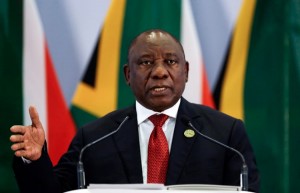 by SAVIOUS KWINIKA
JOHANNESBURG – SOUTH Africa is advocating for the continent to have permanent representation on the United Nations (UN) Security Council.

President Cyril Ramaphosa disclosed that this will be among some issues he will raise when he addresses the UN General Assembly this week.

The organisation is marking 75 years of existence.

“We therefore need to strengthen bodies like the UN, ensure they are properly resourced and that they are representative,” Ramaphosa stated on Monday.

He said the world must use this anniversary to push ahead with the reform of the UN and particularly its Security Council, which does not give equal voice to the different regions of the world.

“As South Africa, we will use our virtual presence in New York to continue to advocate for Africa – a continent of more than a billion people – to have permanent representation on the UN Security Council.”

Ramaphosa noted this year also marked the 25th anniversary of the Beijing Conference on Women, which put the emancipation of women on the global agenda.

He urged the global community to intensify measures to empower women economically.

This is in line with the African Union (AU) decision to dedicate this decade to the financial inclusion of women.

Later this week, Ramaphosa pointed out, South Africa would take part in a panel of G7 and African countries on women’s digital financial inclusion in Africa.

“It will look at how women can take advantage of technological advances to start businesses, trade and find meaningful employment,” Ramaphosa said of the event.