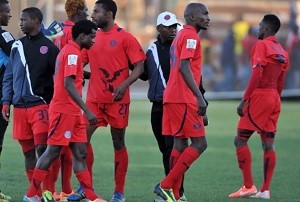 by MTHULISI SIBANDA
JOHANNESBURG – AFTER initiating their rebuilding strategy for the next season with a couple of signings from outside South Africa, Jomo Cosmos are also running an eye over some prospects in the club’s academy.

This is with a view to promoting them.

Ezenkosi have got the ball rolling in the transfer market ahead of the new season to avoid a predicament that saw them narrowly survive relegation from the first division in the recently-ended campaign.

While all the focus has been on the West African pair, the technical team believes the solution can come from within.

“We are just checking our academy boys. We are looking to promote some,” assistant coach, Brian Sebapole said.

He is confident this strategy, and retaining the core of the side that finished the season impressively in the bio-bubble, bode well for Cosmos’ fortunes next season.

Jomo Cosmos’ side finished 13th on the 16 team log and only survived on the last day of the season.

They were the in-form team in the bio-bubble after accumulating 11 out of 15 points in the last five matches.

Only champions, Moroka Swallows bettered that with a perfect record of 15 points.

Sebapole said they would build on the finish.

“We have kept the core of the team from the bubble,” he said.

While he kept the names of the players that have excited Sono’s technical team, Sebapole sang the praises of Sangara, whom he disclosed is already in the country.

“What a gem. He is a maestro,” Sono’s assistant coach raved.

The 21-year-old has been signed as a free agent after leaving Club Sportif Hamman Lif of Tunisia.

He has featured in the Confederation of African Football (CAF) Champions League for AS Togo Port.

Igidimba, who is aged 23, was in the books of Moneni Pirates of Swaziland last season.