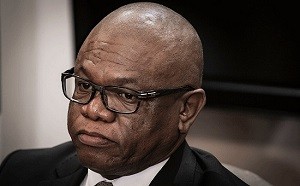 by AKANI CHAUKE
JOHANNESBURG – JOHANNESBURG mayor Geoffrey Makhubo has warned business forums against delaying the completion of projects in the City.

He said such delays would hinder the provision of much-needed services to the people.

“Business forums should follow proper channels to raise their grievances regarding any City-led projects,” Makhubo said.

He was speaking during an oversight tour of Rea Vaya Phase 1C (a) route in Wynberg.

The project, a new route that will connect Phase 1A and 1B from the Joburg urban to Alexandra and Sandton, is due for completion in 2021.

The oversight tour forms part of the October Transport Month activities as well as part of the Executive Mayor’s monitoring and evaluation responsibilities.

The Watt Interchange is also expected to form a key link connecting the bus rapid transit (BRT) systems from other Gauteng Metropolitan areas, Tshwane and Ekurhuleni enabling travellers to move seamlessly and cost-effectively between the three Metros.

“Transport is one of the backbones of Johannesburg’s economy and plays a significant role in connecting residents safely and affordably to education, business and work opportunities,” Makhubo said.