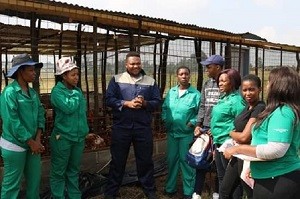 This is thanks to rising dam levels, favourable weather outlook and the emergence of millennials driving technological change in the industry.

The only one of nine sectors in the economy to show gross domestic product growth (GDP) in the second quarter, the sector’s buoyancy is also welcome news for consumers as food inflation will remain subdued and that interest rates will remain low in the near future.

The glowing forecast by industry experts follows the agricultural sector performing admirably amid economic decline and the coronavirus outbreak ravaging other sectors.

The agricultural sector expanded by almost 28 percent in the first quarter compared to the same period in 2019 and 15,1 percent in the second quarter.

Conversely, manufacturing and trade declined by more than 10 percent, followed by transport and communication and mining with a drop of around 6 percent during the same quarter.

The South African Weather Service (SAWS) has observed La Nina-like conditions in the Pacific Ocean for the summer rainfall areas.

“That means we can expect above normal rainfall for most of the Southern Africa summer rainfall region,” Christien Engelbrecht, SAWS meteorologist, said.

According to the weather service, current sea surface temperatures show cooler than normal conditions in the Pacific Ocean, which is seen as a good precursor for summer rainfall in South Africa.

“The cooler season should result in less heat stress, especially in areas where farmers are concerned about a mid-summer drought. All indications are that the chances of that are smaller than in previous summer seasons,” Engelbrecht explained.

Already the overall 65,7 percent capacity in dam levels is hailed as good for this time of the year as the new rainfall season begins. Of the top ten dams by capacity, eight were above 80 percent full. Only two remained below the 50 percent level.

The economist predicted that food inflation would remain restrained and that interest rates would remain low in the foreseeable future. Rates are currently at record lows. FNB expects another cut of 25 basis points in interest rates. The financial giant only expects increases in late 2022.

“This bodes well for consumers and producers,” Makube said.

While millennials – youth born between 1981 and 1996- make up 8 percent of the farming community locally their role in the growth of the sector cannot be understated.

They make up that minority portion, according to Lianne Jones, Country Manager for the Produce Marketing Association, but they are driving 75 percent of the technological change in the farming industry.

“They are going to change the face of agriculture,” Jones said.

While optimism prevails in the sector, the future of the agricultural sector and its growth trajectory however remain highly dependent on policy certainty around land reform, labour stability and access to reliable and affordable energy sources.

South Africa’s economy is bearing the brunt of the COVID-19 with this year’s contraction forecast to be the biggest in about 90 years.