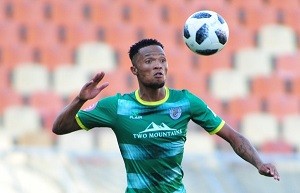 This includes an overseas move if he maintains the form that won him the accolade.

Mosele, the lad from the North West, has been a revelation for Baroka in the past two seasons that has seen him amass over 60 appearances.

Of those appearances, 22 were in the league last season.

According to legendary midfielder, Brian Sebapole, who is credited with unearthing the star, his talent has never been in doubt and greater things lie ahead if Mosele keeps his feet on the ground.

“Pelele” was part of the development initiative by the City of Matlosana under its 2010 legacy programme that has produced the likes of Winston Vander
Linde (TS Galaxy), Tshepo Ramaele (Tshakhuma Tsha Madzivhandila), Conrad Madolo (ex-Chippa United and Jomo Cosmos), Axolile Noyo (Cosmos).

Mosele was playing in the Under-12s.

“His vision (Mosele), ball control, passing, work rate and intelligence…….for an 11-year-old, for me it was exceptional and brilliant,” ex-Bafana Bafana midfielder Sebapole said in an interview with CAJ News Africa.

“Pelele has always been very quiet, with big heart, endurance, good vision on the ball, passing, control and intelligence. At that age, they would walk 10km to and from school grounds and stadium to train or play.”

The legend added, “He reminded me a bit of the sensational Sipho Nunes and the likes of Aubrey ‘Sense of Knowledge’ Lekwane.”

Nunens and Lekwane starred for Mamelodi Sundowns and Orlando Pirates respectively but despite being some of the most talented players of their generation, they failed to reach their potential and moves overseas never materialised.

Sebapole, one of a few South Africans to star in the United States (US) premiership, with the San Jose Earthquakes, believes Mosele can make it abroad.

“I remember having to drive him (Mosele) to his home to meet his parents and I made them aware of the potential their son had and how he is going to be a star who will play his football abroad,” the ex-Jomo Cosmos midfielder, who also played in China, said.

He believes the player can also make it in the bigger teams in the DStv Premiership.

“If he keeps working as hard and focused, anything is possible for him. He is on his third season with Baroka and won a cup (Telkom Knockout) with them. I believe he is ready for any pressure,” the Klerksdorp-born retired player said.

Mosele played that entire final as giant slayers Baroka FC won their first piece of silverware with a 3-2 penalty shoout-out victory over the highly fancied Orlando Pirates, after the teams were tied 2-2 in regulation time at the Nelson Mandela Bay Stadium.