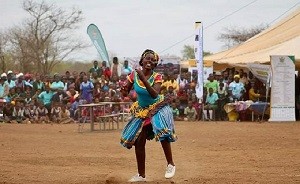 from MORRIS BISHI in Chiredzi, Zimbabwe
CHIREDZI – PREPARATIONS for the annual Great Limpopo Cultural Trade Fair (GLCTF) have received a timely and financial boost after the custodian of culture in Zimbabwe provided US$25 360 for the event.

The Culture Fund has made the finances available to the Centre for Cultural Development Initiatives (CCDI), the organisers of the fair.

This comes as some respite to the event scheduled for Boli Mhlanguleni, Chiredzi north, Zimbabwe, whose preparations have been overshadowed by the coronavirus (COVID-19) outbreak.

Khesani Matatise, the CCDI Public Relations Officer, told CAJ News that the Culture Fund approved funding to their organisation in August and released the first batch of funds last month.

Matatise said this year`s cultural fair would see groups being invited to focus on key issues on different days during the event, which will take three days due to COVID-19.

It usually runs for a week.

The tentative theme for this year is “Building Community Resilience beyond COVID-19 to Accelerate Grassroots Development.”

Dates are yet to be set.

Lovemore Chisema, the Chiredzi District Development Coordinator, said the GLCTF was now an important event on the calendar for the region.

He said in consultation with the event organisers, they would discuss on a possible date for this year`s edition.

On its initial stages, the cultural fair first held in 2013 was held on rotational basis throughout the district.

CCDI later constructed a multi-cultural village (Avuxeni) to promote tourism in a rural setup of Mhlanguleni, which is on the margins of Gonarezhou National Park. It is also home to Tsonga communities, commonly known as Shangani / Changani people.

GLCTF seeks to galvanise indigenous communities` voices in safeguarding the rights of minority groups, the use and protection of natural resources for their socio-economic benefits.

The Culture Fund was established to support the development of a sustainable and vibrant arts and culture sector in Zimbabwe that contributes to national development frameworks and programmes.