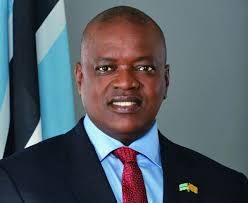 from NDABENI MLOTSHWA in Bulawayo, Zimbabwe
BULAWAYO – ZIMBABWE’S state security agency has reportedly foiled an attempt of a coup in neighbouring Botswana as the factionalism within the ruling party gets nastier.

The coup attempt allegedly involved some South African politicians and comes weeks after the South African National Defence Force (SANDF) was accused of involvement in the plan to topple the government of President Mokgweetsi Masisi.

Venson-Moitoi was challenging Masisi for the presidency of the Botswana Democratic Party (BDP) but pulled out of the contest at the last minute.

Botswana’s Sunday Standard claimed it had evidence implicating South Africans in the plot.

There are claims Motsepe Radebe, who is sister to Energy Minister, Jeff Radebe, provided US$5,5 million (R77,34 million) in cash to prop up Venson-Moitoi’s bid through vote buying.

It is alleged the money was laundered via Zimbabwe, where Venson-Moitoi and her delegation were reportedly detained and quizzed by the Central Intelligence Organisation (CIO). This reportedly happened at the resort town of Victoria Falls, north West Zimbabwe.

It emerged the Botswana Financial Intelligence Agency (FIA) had frozen Avante Security Services bank accounts in Gaborone on suspicions that the company was used to launder the money.

There were no immediate comments from the accused. Efforts to obtain comment from ANC acting spokesperson, Dakota Legoete, were fruitless as his cellphone was going on voicemail at the time of going to press.

In a recent tweet, Venson-Moitoi hinted at the accusations but appeared to deny them and threatened legal action.

“I was not in Zimbabwe. My son was not in Zimbabwe either. He was in Kang and I was in Gaborone at the Parliamentary flat working with my campaign team. My lawyer will deal with the Sunday Standard for the lie. My God will go after their sponsors, watch this space!!!”

SANDF recently rejected claims of involvement in a planned coup in Botswana after media implicated it.

“The SANDF notes with dismay adverse claims on certain Botswana media platforms alleging the SANDF had credible intelligence about a looming coup in Botswana. The SANDF wishes to state the reports contain factual inaccuracies and rejects with contempt allegations the SANDF had information that a coup was plotted against the government of Botswana.”

Botswana has over the years been hailed as a model for democracy in Africa and a beacon of stability.