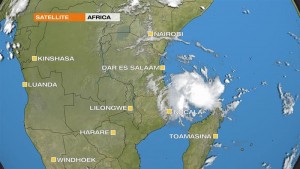 Tropical Storm Kenneth is brewing in the Indian Ocean and projected to come ashore near the Tanzania-Mozambique, bringing heavy rains and flash flooding.

According to weather monitoring services, the storm may bring life-threatening weather with wind speeds of up to 105 miles per hour (168 km/h) to northern Mozambique, Comoros Islands and Tanzania over the coming days.

At least 700 000 people are at risk in northern Mozambique.

The southeastern Africa region has barely recovered from the effects of Cyclone Idai, which hit in March and killed more than 1 000 people in Mozambique, Zimbabwe and Malawi.

“This would be a double whammy of disasters,” said Marc Nosbach, CARE Mozambique’s country director.

He said existing relief resources for Idai were not sufficient hence it would be disastrous to respond to another crisis.

“Due to the funding situation, our teams are stretched beyond their capacity. Responding to another disaster in Mozambique without more resources will be very difficult, if not impossible,” Nosbach said.

It also pointed out the last flooding had resulted in a cholera crisis that has left at least so many people dead so far in Mozambique.

“Direct Relief will continue to coordinate with local healthcare providers throughout the week and respond to the impacts of Tropical Storm Kenneth as needed,” spokesperson, Lara Cooper, assured.