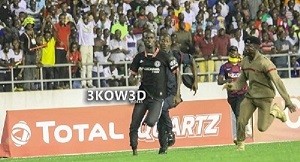 from RUSSELL ADADEVOH in Accra, Ghana
ACCRA – A GHANAIAN football supporter who invaded the pitch in his country’s match against South Africa said he did so in order to draw the attention of his idol, ace midfielder Thomas Partey.

The fan, Awal Suleman, said he stormed the Cape Coast Sports Stadium in order to get a selfie photograph with the Spanish-based footballer.

He created drama as about 20 police officers chased him around the stadium in his bid for a picture with the Atletico Madrid player.

The culprit was taken to police custody last Friday, a day after Ghana defeated South Africa 2-0 in the Africa Cup of Nations (AFCON) qualifier.

It has since emerged Suleman is a student at the University of Cape Coast’s Nalerigu College of Nursing in the Northern Region.

He is a 400-metre athlete hence he outpaced the police officers when he invaded the stadium packed with 15 000 spectators.

The culprit said he had missed opportunities to take a photograph with Partey when the Black Stars team made stops in the Cape Coast township before the match with Bafana Bafana.

“I like the way Partey plays. I just wanted to have a picture with him and the opportunity I would get is on the field of play and that is why I went there (invaded pitch),” Awal told a Ghanaian radio station.

Social media was abuzz as people commented on the man’s antics.