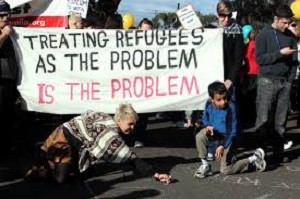 by SAVIOUS KWINIKA
JOHANNESBURG – THOUSANDS of Ethiopian refugees living in South Africa are dangling an offer of R100 million (US$6,94 million) to the host country’s government in exchange for permanent residence permits.

The offer has hit a snag with South Africa reluctant to accept this capital injection that the Ethiopians believe would help boost the economy and create jobs.

The Ethiopians have made the offer through the South African Development Foundation (SADEF), an organisation that solicits funds from individuals and donor organizations and works in partnership with community-based organizations to provide financial and technical support to communities still disadvantaged by decades of apartheid policies.

Ethiopians have since last March (2019) been contacting various government institutions such as the Investment Centre, Departments of Home Affairs, Trade and Industry as well as Small Business Development with the offer.

They have also contacted Deputy President, David Mabuza, and the Minister in the Presidency, Jackson Mthembu.

“To me, agreeing to the Ethiopians’ proposal to give government R100 million in exchange for permanent residence permit is like selling the country,” Dlamini argued to CAJ News Africa.

“I received the paper from Ethiopians sometime in December. Minister Mthembu has not yet seen it but I will definitely give it to him soon. Frankly speaking, their proposal for residence permits in exchange for R100 million is exactly what the Guptas were doing here.”

CAJ News Africa can reveal that 5 000 Ethiopians, some who operate small and medium enterprises, are pledging to ready to contribute R20 000 each over a period of six months, as capital to start the SADEF industrial programme.

“We are not talking about all Ethiopians but a specific group under the leadership of Africa Diaspora Forum in Johannesburg,” said a spokesperson.

They believe the SADEF programme would grow the R100 million into a funding steam of R63,5 billion within 20 years and thus create about 5 million jobs and massive inclusivity.

“There is an extensive business plan with black people as main beneficiaries,” the Ethiopian official said.

Most Ethiopians in South Africa are refugee permit holders, but have been in the country for more than 10 years.

Luke Zunga, an economist at the African Diaspora Forum said if accepted, the proposal would ensure migrants contribute billions of Rand to the economy through job creation while individual members would increase their investments into the country.

“Permanent residence permits are not citizenship and the Ethiopians are thus not seeking citizenship but a situation which solves both the unemployment in South African and the root cause of refugees and migrants from Ethiopia,” Zunga told CAJ News Africa.