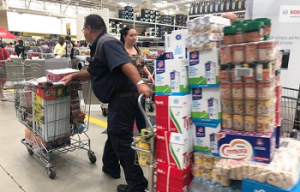 Panic buying in South Africa has become order of the day despite the Department of Trade and Industry )DTI) assuring the nation and entire SADC region enough food supplies. Photo, Twitter

by AKANI CHAUKE
JOHANNESBURG – DECLARING a three-week lockdown, as part of drastic measures to curb the rapid spread of the coronavirus (COVID-19) in South Africa, President Cyril Ramaphosa appealed to his compatriots to desist from panic buying as the supply chains would not be impacted.

He assured that his government had discussions with manufacturers and distributors of basic necessities, who had indicated that there will be a continuous supply of goods, including basic commodities such as food.

“There is therefore no need for stockpiling of any items,” Ramaphosa said on Monday evening.

Apparently, the message by the head of state fell on deaf ears.

On Tuesday morning, stockpilers laid siege on major retail outlets in defiance of the head of state’s address.

This insubordination could prove not only to be an exercise in futility as economists backed the government’s and food industries’ positions that the country had enough to stock to cover the lockdown and beyond.

The stockpiling could also backfire on the culprits as during their raid of the retail outlets, exposed themselves to COVID-19 by flouting precautions such as maintaining social distancing and avoiding crowds of 100 people or above.

In fact, he maintained, South Africa would not experience food shortages, at least for most food products over the next 12 months.

“South Africa is an agriculturally endowed country, generally a net exporter of agricultural and food products. There are high prospects for an abundant harvest of staple grains and fruit this year, which will increase the local supplies,” Sihlobo said.

The economist said in the unlikely event of potential shortages, it would be due to glitches in the logistics of shipping imports rather than a decline in global essential grains supplies.

For example, the 2019/20 global wheat production could amount to 764 million tonnes, up by 5 percent year-on-year, according to data from the United States Department of Agriculture.

Sifiso Mkhize, a socio-economic analyst who has been following the COVID-19 closely, also denounced the panic buying.

“It (stockpiling) is useless because food retailers won’t close,” he said in an interview.

Major retailers are exempt from the lockdown announced by the president.

“If the big grocery stores were going to close with the rest of the businesses in the country then stock piling would be necessary,” Mkhize said.

That too, he added, had a disadvantage because food had an expiry date

“You (panic buyer) might end up having to throw it away once it passed its sell by date,” Mkhize said.

Ebrahim Patel, the Minister of Trade, Industry and Competition, appealed to citizens to remain calm and to buy only what they needed for their immediate requirements.

“We are keeping the full food supply-chain open, from farms and fisheries, to factories, transport systems and shops, so that we can have food available in this period and beyond.”

“This is a moment to show our caring for each other and to resist any effort to score from the crisis,” Patel said.

Tags : Panic buying in South Africa has become order of the day despite the Department of Trade and Industry )DTI) assuring the nation and entire SADC region enough food supplies. Photo Twitter