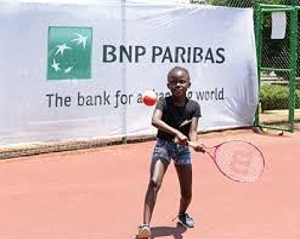 by AKANI CHAUKE
JOHANNESBURG – SOUTH Africa’s next global tennis star could emerge from the impoverished township of Alexandra, north of Johannesburg.

This thanks to the launch of a programme to provide playing opportunities for young players in the impoverished township.

It is inspired by the first edition of the BNP Paribas RCS Rising Star initiative, which aims at increasing youth participation in tennis in South Africa.

Ndumiso Ncube, head coach at Next Generation Tennis based at the Sandton Sports Club, has partnered with Hope Mathopa, a coach from Alexandra, to take the sport to the youth of the township in Gauteng.

The programme has grown massively, having started with ten children less than three months ago. Now, there are 38 regular participants, aged between 7 and 15 years, who participate in the weekly programme.

“Some of the kids have played tennis before but most of them haven’t. So, the idea is to give them basic ball skills,” Ncube said.

He said the goal was to get the youngsters to play in the BNP Paribas RCS Rising Star tournament.

“The kids love it, and we as coaches are enjoying it as well,” Ncube enthused.

Mathopa said the participants had already learned key skills and values on and off the court.

“When we started, most of them couldn’t hit a ball but since we started this programme, the children have shown a lot of improvement,” he said.

Mathopa is hopeful that ultimately, some youngsters would compete globally.

“I hope they will continue to play tennis until university. Maybe some of them will even be able to compete internationally,” Mathopa dded.

Meanwhile, Grey College and Oranje Meisieskool, both in Bloemfontein, will start the defence of their titles when the 2021 BNP Paribas RCS Rising Star campaign begins in March.

This after winning the boys’ and girls’ divisions respectively at the inaugural series finals held in Soweto earlier this year.

This, the second year of the event, will see the inclusion of high school players and a wheelchair category.

A United States Open and Wimbledon men’s singles finalist in 2017 and 2018 respectively, he is the face of the BNP Paribas RCS Rising Star campaign.

It aligns with his long held desire to develop tennis in South Africa and make it accessible for all.