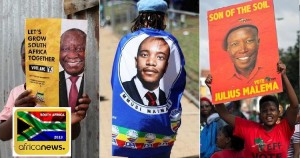 by MTHULISI SIBANDA
JOHANNESBURG – MILLIONS of South Africans have gone to the polls in what is certainly is the most significant general election since independence in 1994.

About 26,7 million people are registered to participate during the sixth general elections. This includes 11 000 prison inmates.

A total, 48 parties are contesting.

Political leaders set an example by taking early to the polling stations.

Ramaphosa said the election was a milestone in South Africa’s development.

“It is our duty as citizens to exercise our hard-won right to determine the direction in which the country moves. Our vote ensures that our democracy remains vibrant and inclusive,” he said.

His wife, Mantwa, accompanied him.

Unemployment and poverty are rife in Africa’s most advanced economy that is also beset by corruption. Service delivery protests marred preparations for the election.

While the counting of ballots will begin promptly after voting stations close on Wednesday night, final results will be announced on Saturday.

“We’ve long held that the nominal exchange rate is perhaps not the best barometer of political risk ahead of this general election, with expectations largely priced into USD/ZAR,” said Nema Ramkhelawan-Bhana, Rand Merchant Bank economist.