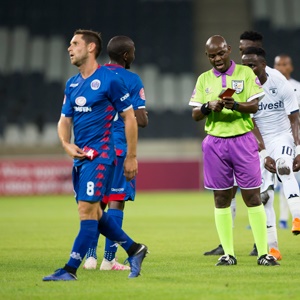 by MTHULISI SIBANDA
JOHANNESBURG – AT face value, the South African Premiership has been enthralling, with the champions and the relegated side to be confirmed on the final day.

While it goes down to the wire, in reality, it has been one of the most forgettable campaigns after a series of indiscipline, poor match officiating and boardroom bungling.

The curtain comes down the Absa Premiership on Saturday with holders Mamelodi Sundowns and Orlando Pirates in contention for the title and R10 million prize money.

At the wrong end of the table, one of Baroka, Black Leopards, Chippa United, Free State Stars and tail-enders Maritzburg United will be relegated to the less glamorous National First Division (NFD) or the taxing playoffs against the sides that finished second and third in the NFD.

While it is the most lucrative football league in Africa, the South African premiership is synonymous with controversy and the 2018/19 was no different, if not the most contentious.

Poor match officiating blighted the campaign. Matters came to a head recently when the match between Bidvest Wits and Supersport United descended into a circus, starring referee Phelelani Ndaba and Abel Maphutha.

A legitimate goal by Zimbabwean hotshot Terrence Dzukamanja was disallowed, denting Wits’ title challenge in a match that eventually ended 1-1.

Another referee Thokozani Mkhize also stole the show in the recent KwaZulu Natal derby that ended 1-1 between Amazulu and Golden Arrows albeit after some dubious decisions. He was also the man in the middle in a contentious first division match between newly-crowned champions Stellenbosch and TS Galaxy, who were on the receiving end of his ineptitude.

Referee Elphas Sithole had a stinker in the games featuring Supersport and Pirates as well as Wits and Black Leopards.

Not to be outdone, John Landela refereed below par in the matches involving first division campaigners, Tshakhuma and Ubuntu Cape Town, as well as Kaizer Chiefs and Arrows.

The South African Football Association (SAFA) was recently forced to step in to address the rot.

Erring officials will no longer be appointed to handle matches in the Premiership or the first division.

It was not the first time SAFA had to intervene in the mischief characterising the elite league.

Earlier this season, AmaZulu were docked six points for unlawful termination of the contract of Namibian player, Phineas Nambandi.

Relations between Premier Soccer League (PSL) and SAFA have over the years have been frosty. They have mostly been petty. The two organisations clashed again after SAFA secured a sponsorship deal with finance firm, OUTsurance, for match officials.

The deal apparently is in conflict with the rights of Absa and Nedbank, the financial organisations that sponsor the league.

Meanwhile, teams disregarding rules and fielding ineligible players marred the campaign and PSL again found itself in a fix.

PSL dithered on the case involving Sundowns fielding defender Wayne Arendse. The sanction was issued after six months. Weirdly, the player was slapped with a R50 000 fine, a quarter of what the club was fined.

Weird since Arendse did not field himself.

A match between hosts Bloemfontein Celtic and Cape Town City was recently abandoned after home fans invaded the pitch. Arguably the most passionate fans, Celtic supporters are disillusioned at the club’s uncertain future.

The campaign has also exposed the dearth of homegrown strikers. Leopards’ Zambian international, Mwape Musonda, leads the charts with 16 goals, a massive nine goals ahead of locals Gift Motupa and Tshegofatso Mabaso.