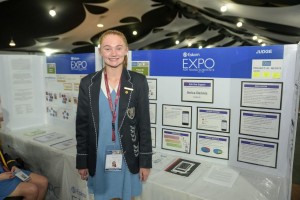 by SAVIOUS KWINIKA
JOHANNESBURG – TWO South Africa’s finest young female scientists will compete against learners from around the world in Turkey’s most prestigious science fair for high school learners.

The two budding scientists will compete against learners from 25 countries at OKSEF from June 11 to 15.

They had been handpicked by judges after showcasing science projects of exceptional quality at the Eskom Expo for Young Scientists International Science Fair (ISF) last October.

“More so, they come from fairly small towns, which often don’t get the proper recognition for producing such talent. These young girls have earned their place to be on the international stage and I’m quite confident they will not only do South Africa proud, but will also undergo a life changing experience in Turkey.”

Dennis’s scientific research entails an expert system mobile app that shows the urgency of the conditions of children based on their symptoms.

Basic danger signs are identified and the urgency to get the child to a healthcare professional is expressed in three classes: high, medium, low.

Dennis, who aims to address child mortalities in rural areas, believes the lives of children can be saved if parents realise the urgency of a sick child’s condition.

Hewitt, who was inspired to find an affordable alternative to expensive chemicals used to dip livestock, investigated whether Aloe Ferox deters ticks that plagues animals on farms. The idea was to take the liquid of Aloe, as well as the dried crushed aloe, and place this in containers with ticks and monitor their movement.

Hewitt’s research found that the Aloe Ferox plant showed some signs of deterring ticks from it.