Tennis’ Big Three to the rescue of local coaches 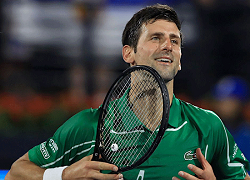 by MTHULISI SIBANDA
JOHANNESBURG – TENNIS coaches and technical officials unable to work or earn a living under the national risk-adjusted coronavirus (COVID19) strategy regulations have received a major boost.

The local mother body- with the involvement of the sport’s Big Three- has raised funds to cushion them from the COVID-19 catastrophe.

Novak Djockovic, the world number 1, Roger Federer, who is the most successful star of the game, and Rafael Nadal, the global number 2, have been involved in raising the funds.

They have done so directly and indirectly

Tennis South Africa (TSA) confirmed at least R64 000 had been raised through a series of auctions in recent weeks under the Tennis Cares fundraising drive.

Among memorabilia auctioned include the Match in Africa frame, which at the close of the auction on Friday had received a bid of R34 000.

The Match in Africa was played at the Cape Town Stadium in December, featuring world number 4, Federer, and longtime rival Nadal.

Some 51 954 spectators attended, setting a record for the highest ever attendance at a tennis match.

Meanwhile, a shirt signed by Djokovic fetched R20 000. Coincidentally, the Serbian Djokernol contracted the virus but has recovered.

“The items on auction (were) donated by individuals to help us raise funds to support coaches and technical officials affected by COVID-19 through the #TennisCares fund,” Moruthane said.

An independent panel determines recipients of the funds to be distributed weekly basis through electronic food vouchers that can be used at leading retailers.

Tennis has not been spared the escalating COVID-19 pandemic that has claimed the lives of 3,026 people from 187 977 cases confirmed in South Africa this past weekend.

Last week, TSA announced the cancellation of the SA Spring Open scheduled for September and October.

It is now scheduled for next year but dates have not been announced.

On a positive note, it announced that all categories of club tennis players can resume play with immediate effect but under strict safety measures put in place to ensure compliance with national government protocols.