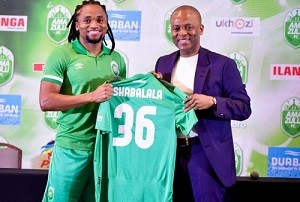 by NJABULO BUTHELEZI
DURBAN – AMAZULU president, Sandile Zungu, believes they have made the right signings to turn the side from perennial relegation strugglers finish to title challengers.

He has set a target of finishing in the top four.

The businessman, who recently took over the Durban-based outfit restated that ambition on Monday as he unveiled nine new players ahead of the resumption of the 2020/21 campaign.

World-famous Siphiwe Tshabalala is the marque signing for coach Ayanda Dlamini’s side.

“The arrival of these players to Usuthu demonstrates our intent to compete and elevate this brand to where it is supposed to be,” Zungu said.

“I’ve maintained that AmaZulu is a top four club,” he reiterated on the mandate he has set the team for the coming season.

“However, it is not just about saying it, it is also about taking the necessary steps in ensuring that this vision is realised,” Zungu added.

“Every action that we have taken has been deliberate and backed with the sole purpose of achieving our goals as a club. What you have been witnessing in the past couple of weeks is a rebirth of AmaZulu.”

The club president disclosed that he had spent time with each of the players articulating the vision he has.

“They have not shied away from it,” Zungu said.

“They have chosen to embrace it and be part of it. Their experience and ambition will translate in how they fight for their positions to play and how they compete during matches.”

AmaZulu finished 13th last season after spending most of the campaign rooted at the bottom.

The new players must hit the ground running starting with the league opener against visiting Orlando Pirates at the Jonsson Kings Park Stadium on Saturday.

Coincidentally, Mulenga and Memela have joined Usuthu from Pirates.

Siphelele Mthembu and Thembela Sikhakhane have also played for The Buccaneers.