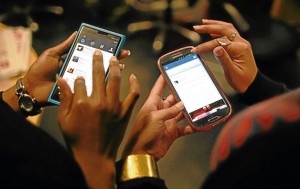 South African mobile users at risk of being spied at.

by SAVIOUS KWINIKA
JOHANNESBURG – A MAJORITY of South Africans use mobile phones to go online but few realise the risk of spying than the gadgets expose them to.

According to Google’s Consumer Barometer, for many people in South Africa, internet access is mobile-phone-centric, with 69 percent of users using the mobile phone more often than computers or tablets to connect to the internet.

Moreover, a Global Web Index report shows that as many as 16 percent of the world’s online population are mobile-only.

Relying on smartphones to go online is particularly popular in countries with younger populations.

“Unfortunately, few people realize that mobile devices are even better at spying on them than computers,” said Daniel Markuson, a digital privacy expert at NordVPN.

Markuson said millions of apps make it easy to use smartphones not only for social interaction but also for payment or storing sensitive data.

“That means users are vulnerable to security breaches as well as personal hacking attacks, especially on public Wi-Fi,” he said.

Among other tips NordVPN recommended that user recognise suspicious message, be vigilant when downloading apps, update software and use a VPN on the mobile phone.

Tags : South African mobile users at risk of being spied at.